Do you REALLY need expensive studio equipment for quality images?

When photographers are looking into studio work, or models want to get a highly creative image, some believe that expensive equipment in a high end studio is the only way to go. NOT necessarily true!

If the photographer understands how to adjust and mold lighting within the studio, high end equipment is not needed. In fact, the image above was created with lights that were under $100 each along with some photographic gels and a water bottle for the misty effect in the image. 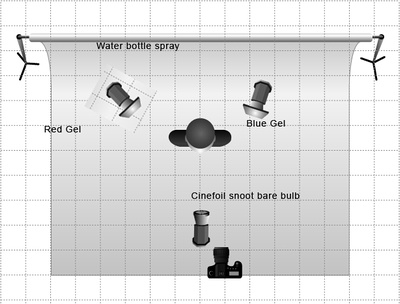 LightingSetupUse this to share your lighting setup or to document your setup for future reference. Email me at [email protected] for comments and/or suggestions. Not for commercial use.

The Gels lights (red & blue) were placed at a 45 degree angle just behind the model. Keep in mind, with the strobes, the higher the power on the strobes the less saturated the colors may be. In some cases, you may want to change your white balance in camera to Tungsten (which will reduce yellow).  Do you need photographic gels? In this case yes, because gels from other places such may melt, especially with modeling lights turned on.  (Note here: Gels that are not directly attached to lights do not have to be photographic quality- you may clear gels from a florist. Gels can be placed in front of your camera and shot through for some nice effects). The strobes were placed at about shoulder height to the model.

The front strobe was a bare bulb stroke with Cinefoil (black aluminum foil- available in small rolls from Amazon) molded around the strobe so as to limit light on the background but carefully aimed to light the model. This light was slightly above head level on the model and angled down slightly.

I did not have an assistant, so I set the camera on a tripod and set the timer for 10 seconds while I sprayed water just behind the model in a mist (yes, she did get wet).

There of several variations of this lighting setup including flags to prevent light from spilling onto the background. A black backdrop will give a slightly different look than a grey backdrop (used in this example). It is important to tell the model to stay on her mark. If she/he moves significantly not only will there be a very dark color cast on the model, but the key light will hit the background creating a highlight. Of course, there are many other colored gels that could have been used for a similar lighting setup, as well as the 'gelled' lights could have been moved around in front of the model.

People may shy away from higher end strobes because...