Landscapes with a little twist

Although typically I photograph people, I started my photographic career my photographing landscapes. The image to the left is a Cityscape of New York. The image itself is not bad, but certainly is similar to many others taken of the city. I thought, how could I make it just a little different?

I stared by darkening down the sky just a little by using the gradient tool in lightroom. I took the sky down about 1.5 stops so that ideally it would not overpower the buildings in the lower portion of the image. This was a start, but what next? 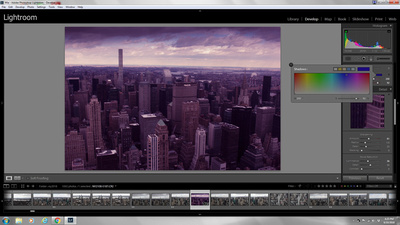 I came down to the 'split-toning' portion of the lightroom panel and wanted to deepen the shadows. By clicking on the Shadows swatch block I was able to open up a color picker and chose a fairly dark blue.

I moved the saturation slider over quite a bit, and then finally settled on a saturation of 79%. Of course every image will be different and sliders can be moved to ones own artistic taste.  If I wanted to, I could always move the hue slider if I did not like to overall color in the the shadows. In this case, I did reduce the hue slightly since the images was a little too purple.

So, once again comparing the two images at the top of the post, they look very different from each other and very different from many of the images that were probably taken that day.  Think about color toning your Cityscapes next time you go out to get just a little more boost from the shots.