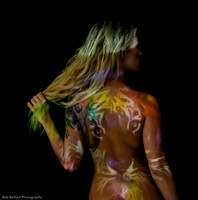 There are certainly many ways to display images or paint textures with light with dozens or videos on youtube as well as formal presentations and workshops. But what if you wanted to try to light paint directly on the human figure? It is certainly possible to use some of the same techniques that one may use in open air or even against another structure. But, here is one more technique that can potentially get you noticed.

Suppose that you wanted to project ready made and easily recognizable images onto a human?  Well, that is what we are talking about today! First thing to think about is supplies which are listed below:

- High definition projector (and cable to connect Projector to camera)

- Images (Ideally fractals, which demonstrate the same pattern or shape as the size varies). Many examples can be found in Pinterest.

It can be a little tricky as first. Set your lens with the widest angle possible. Most modern projectors come with a HDMI cable which may be directly connected to your computer. Other connections are also possible, however you may not get the best image quality. Now, bring up one of your images on your laptop. and open the channel to your computer so that the same image appears on the computer as appears on your projected image.

The image above a tiger was projected. You really want a black background for the best possible results. Next, ask a model to stand in the projector beam. Ideally the model will be topless and have little or no tatoos to detract from the shot. In addition to the wide aperture, you will likely want a shutter speed not much less than 1/60 of a second. The ISO can be fairly high for some of these images, in fact start with an ISO of at least 1000 and move upward as necessary to get a sharp well exposed images. The model should essentially stand in the same spot, although may turn forward and backward, In my opinion, the back is one of the best places to capture a good image. Make sure the projector is focused and that the stays relatively still as you take your image. You may also have to move the projector now and again to get the correct size of the image that you wish.

Once you have captured the images that you wish now is the time to move them into your favorite editing program. Lightroom or Adobe Raw work fairly well for me. Some of the controls that you will need to work with include Clarity, Contrast, Dehaze, Vibrance and saturation, and of course noise control. You may have to adjust exposure as well. Make small adjustments with one control at a time and adjust to fit your needs.

Give this a try, and who knows, You may like it!