I have recently photographed several models in a Parachute Dress in a variety of colors. I wanted to share some techniques that I used to make some of the images stand out. This is an intermediate level post when referring to photoshop, so I assume that those reading this post have some familiarity with skills in photoshop such as making selections.  Of course, there are many ways to achieve similar results, but I found these techniques below lends themselves to a reasonably good workflow. In addition, although I used a parachute dress here, the techniques will work with almost any dress. 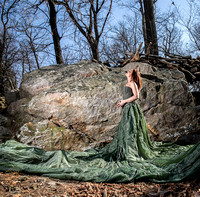 I purchased a parachute from Ebay, without the strings or harness attached. As of this post, a parachute such as this will run about $120 plus shipping. One may be able to find a parachute for less at a military surplus store. My next step was to have an adjustable waist sewn the top of the canopy. I chose to have an adjustable drawstring waist to fit a variety of size models.  As you can see in the illustration above, the parachute was originally green. I also purchased a matching coset top. 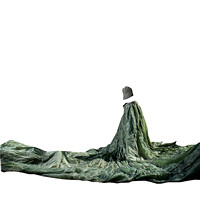 I needed to make a selection of the dress itself to isolate it from both the model and background. Quite a number of methods are available in photoshop, including the newer 'select subject' from the select menu.  The 'Select and Mask" choice from the same menu will allow you to refine your selection. I tend to feather and smooth my selection by as least 2-5 pixels so that it looks natural as opposed to a cutout. I then output this selection to a new layer mask.

Referring to the image at the very top of this post, my client wanted a pink dress. Not necessarily an easy task making a dark green dress light pink. I opened a curves layer and pinned it to the dress cutout with a clipping mask. I next opened the green channel and dramatically pushed the curve upward.

This of course made the dress look like it was glowing neon green.

I next opened up a hue/saturation layer and once again pinned it to the dress layer using a clipping mask. By choosing "colorize" I was able to adjust the hue/saturation/lightness of my selection. 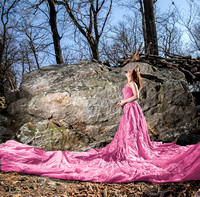 In this case, I produced a pink dress.  Had I not used the curves layer adjustment as described, I was only able to arrive at a magenta dress, however by boosting the luminosity of the dress I was able to get a much lighter color. 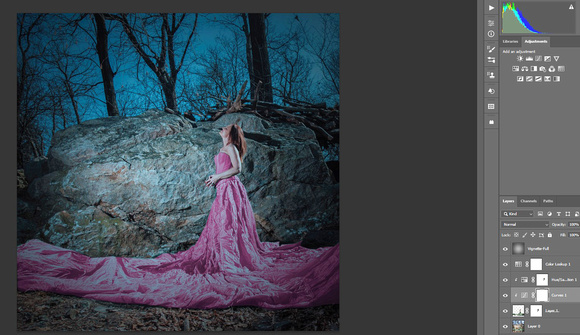