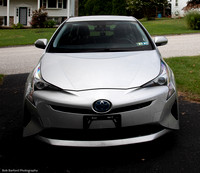 In a time where filters, presets, actions, and assorted other features are available within graphic editing programs as well as cell phones, are physical filters that you apply to your lens useless?

I would argue that they still have a place within mainstream photography. Most photographers try their best to get things right within the camera. There are some great reasons for that including workflow. It can be difficult and time consuming in some cases to duplicate of certain filters even in programs such as photoshop.

Two such filters that I would claims still have a strong place include the neutral density filter and well as a polarizer. Take the two images above, straight out of camera with nothing done other than a little cropping. A circular polarizer was placed on the lens after the first image. Notice the high flare especially on the windshield.  Now take a look at the second image which was polarized. Once can easily see the interior of the vehicle and the glare is not distracting. Granted the effectiveness of a polarizer will depend upon ambient lighting conditions but the effect can be dramatic.  It would be time consuming to get the same detail in post production especially since glare may be so significant to completely blow out highlights.

Another useful filter can be a Variable Neutral Density Filter. There are many out there in the market place ranging from less than $100 to several hundred dollars. Price is often a function of the quality of the glass within the filter.  When one is shooting in bright sunlight, it is often necessary to use a higher f-stop to get a proper exposure. What if you wanted to blur out the background with a shallow depth of field? A neutral density filter, whether a variable unit or a set of filters can come in handy.  Neutral density filters can also allow you to use a very slow shutter speed if the photographer wants to blur water movement, such as from a waterfall.

Take another look at these two filters if you do not already own a set!