There are many tutorials on the net that describe how to edit a photo to get a bleach white skin effect, and often some type of gobo is added to the image. The fact however it that many of these tutorials use stock images that have been downloaded with lighting well suited to this project.  Depending on how you actually lit your subject, the bleach effect may turn out to be more of a desaturated grey. Several extra steps would then needed and you may (or may not) get the results that you wanted.

This technique involved importing the image into camera raw, desaturating the oranges, which essentially left the skin desaturated with red lips (although some orange spots do still remain in the skin that need to be touched up). This is not really what I was going for in the project. 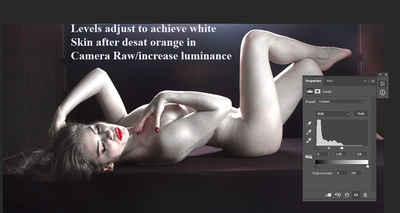 By pulling up the levels adjustment layer and moving the white point slider to the left, I was able to get closer to the white skin that I wanted.

The same effect can be achieve using curves in a very unusual way. By moving the highlights section of the curve (Upper right) to upward and flattening it, I was able to get the white skin effect. Pure white, maybe not, but by using the curves or levels adjustment I can fine tune the final result.

Some additional work will be needed on this image such as removing a few orange spots that remain on the skin. I could also return the hair color to its original shade by adding a layer mask.  This technique will likely also affect elements in the background that once again can be corrected by a layer mask or adjusting lighting using curves.

Give this technique a try the next time you may want that special bleached skin effect!