Every now and again, we make mistakes in exposure.  We may be caught up in the moment, not use a light meter, or simply misjudge what the exposure should be for an image. In this case, not only was the sun out brighter in the morning but I was shooting against a highly reflective surface. The dress was overexposed, turning a pink dress into a very pale shade and blowing out the color entirely in another portion of the dress.

While the details in the blown out highlights are unfortunately lost, some of the original color may be able to brought back into the dress. Although the Hue and Saturation adjustment layer is often the first choice for many, the channel mixer can also be helpful in some cases. 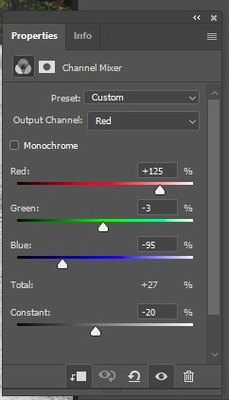 The channel mixer allows you to select a specific hue and boost or reduce it as you feel necessary. In addition, you may choose to turn the entire image black and white using the monochrome check box. You may even alter the tones of the black and white image using any of the RGB sliders. The constant slider controls how bright the image may be in its final edit.

One could also choose an entirely different hue for a portion of the dress by selecting the dress itself, then moving the sliders to the desired color. Special note that if one does not select the dress, the entire image will be affected.

In this case, I boosted the red channel so that I was able to see more of the pink in the dress. Clearly highlights are still blown in the lower portion of the dress, but the image does show some improvement. In fact, changing the color of the dress to  blue made the highlights that much less apparent.

I chose this image as an extreme example, but of course if you want to the channel mixer can serve as one more option when color grading or otherwise adjusting images.