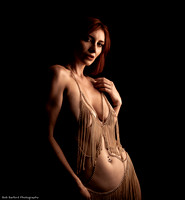 Revisit to the Inverse Square Law

There are literally hundreds of photographic accessories that you can purchase for your camera and studio strobes. In addition, thousands of Presets, overlays, actions, and other editing tools for practically any photo editing app out there for the public or for professionals.

With all of this being true, a little photographic theory goes a long way. Looking at the first thumbnail, there is a 2 ft x 3 ft facing the model at a distance of about slightly over three feet. Certainly depending upon the look that the photographer is planning, there is nothing wrong with this setup. In this particular case, there were no reflectors, or additional light in the studio.

However, to give the image a little more push similar to what you see in the second image above, a little knowledge of the inverse square law is helpful.  In photography, the light is inversely proportional to the square of the distance from its source to the subject. 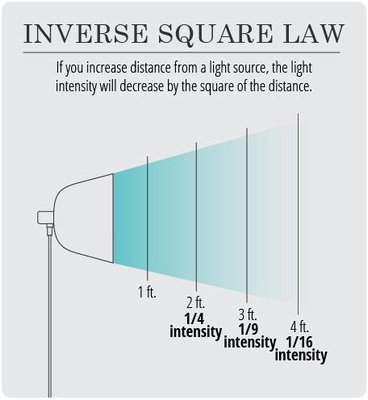 Simply put, light intensity falls off pretty quickly as it leaves the center of the light source so that objects further away from the light are not well illuminated. This is pretty obvious if you shine a flashlight into a yard at night you will notice that the light fades pretty quickly, and the end of the yard is much less well lit than those things directly near you.

Now if we combine this general principle that large light sources close to your subject are often appear softer and less contrasty, we have a plan for an interesting image.

The softbox in the second image was moved very close to the subject (1 ft). While this someone limits posing possibilities, we can see that the room behind her has fallen into darkness, and even starts to fade on the model herself. Given a little cropping and adjusting contrast on the editing program has certainly produced a dramatic image. Depending on the camera, one may also need to set the white balance to "flash" so that skin tones are not blown out and appear natural.

Sometimes going back to the basics can save time and effort with an image and turn an ok image into a WOW image!